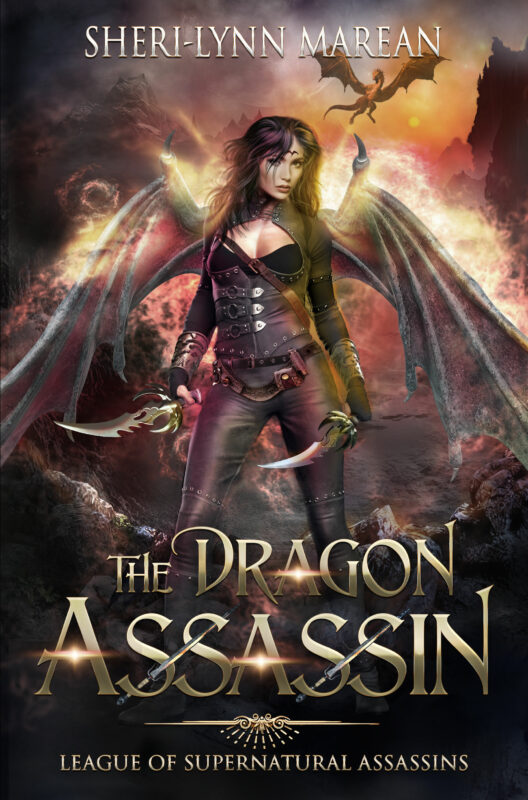 Created to be an assassin ... Treya knew nothing of soulmates.

Created to be an assassin ... Treya knew nothing of soulmates.
As the league's best, she didn’t have friends. But Treya did have food, shelter, and the assurance that the lives she ended deserved it.

But did they really?

When Treya began to question orders, she was given a brother—a hostage to keep her in line. It worked for a bit, but now they need to escape. Only she needs help and who can she trust?

Alone, locked in his realm and slowly dying, anger surged as Ash sensed the female staking out his lair. Then it turned to curiosity as his dragon sought to claim her.
Yet, he had nothing to offer. Or did he?

As the enemy closes in choices will be made, but will they be the right ones?

Treya’s heart lodged in her throat as the mighty dragon—it had to be Ash—turned his large head. He seemed to stare right at her.
Treya shivered. There was no way he could see her, could he?
He roared, a sound that shook the realm, then shot off the cliff. His tail flicked sharply with a crack behind him. Then he arrowed his body straight down, going way too fast.
Treya held her breath, certain he was going to crash into the spiked rocks far below. She exhaled as he leveled off at the last minute.
Shocked, Treya realized she was shaking and her knees had turned to limp noodles. She fell back to sit on a boulder, unable to tear her gaze away.
Ash rocketed straight up into the sky like a speeding comet. He entered a bolt of lightning, and swiftly followed it ever higher.
His whole body illuminated in a brilliant glow of energy. He was magnificent.
Treya’s pulse raced at the sight.
He roared again, a sonic vibration that seemed to rock the atmosphere all around her.
Rooted to the spot, Treya found herself mesmerized as the legend called Ash became one with the storm.
Never in all her years had she ever seen anything like the mighty creature. He owned the sky, the storm, the lighting, and as he gathered speed, it traveled with him. Bolts of light—energy—stayed with him, while others following in his wake, whipping and sizzling lashes of fury.
He drew the storm, pulled it, used and shaped it, roars echoing the furious booms sweeping the land. The rain came down harder, faster, plastering Treya’s hair against her face.
Something stung her cheeks, and it was a moment before she realized it was tears. Treya couldn’t remember ever crying in her life. She blinked, unsure why she was reacting this way. Yet her heart continued to pound in her chest as emotion choked her.
As the dragon finally disappeared, her heart calmed.

Endorsements
Wow! I was blown away from the get-go & did not want to put this must read down when I had to :o ... “The Dragon Assassin's Sunstryker” is probably my favorite book now by this author out of all her 6 star books I’ve ever read in the past ;) ... No-one weaves a story like Ms. Marean does, with a fresh, unique plot, always well-defined characters & clever dialogue, as well as unbelievable attention to detail with surprise twists & turns that will keep readers on the edge of their seats just like I was! ... I highly recommend this page-turner to all adult fans of fiction & now I can’t wait for more, but I will :D
– Deb_B_Me
5.0 out of 5 stars Change in Circumstances"My new favorite!!! The League of Supernatural Assassins is off to a great start. You will be introduced to a cast of characters that I hope to see in future books. Stryker aka Ash is a powerful and a hermit dragon living alone on a planet/realm. You will also meet Darken a dragon of many faces. The J-K siblings can't wait till they all have been introduced. This group of siblings should be very interesting. What happens when a group of assassins get together? Nothing good but possibly deadly. Stay turned in for the next book in the saga." ~Karmelread2665
Book Club Resources
Share
Facebook Twitter Google+
Preview
Disclosure of Material Connection: Some of the links in the page above are "affiliate links." This means if you click on the link and purchase the item, I will receive an affiliate commission. I am disclosing this in accordance with the Federal Trade Commission's 16 CFR, Part 255: "Guides Concerning the Use of Endorsements and Testimonials in Advertising."
We use cookies on our website to give you the most relevant experience by remembering your preferences and repeat visits. By clicking “Accept”, you consent to the use of ALL the cookies.
Do not sell my personal information.
Cookie SettingsAccept
Manage consent