So much is going on! Today I’ve got giveaways, excerpts & News.

1st, I’ve re-released my Dracones Series. (Well, bk 6; Dracones Guardian releases Feb 14th!) They’ve all gotten shiny new covers, or upgraded covers, and book 1 was thoroughly re-edited! Books 2-6 have been light edited/proofed, and they are all re-formatted. They are in KU. Check them out HERE https://www.amazon.com/Sheri-Lynn-Marean/e/B01B89QHVM

2- I’ve finished Dance with Darkness, book 1 in the EfPP (Enforcement for Preternatural Protection) This is a Dracones Allies spinoff, and yes, there is crossover. 🙂 It’s up on pre-order & currently on the way to Laura LaTulipe, my wonderful Editor! You may have seen the cover on my website’s front page, or social media, I love how it turned out, and the story became so much more than I expected.

3- As if I didn’t have enough on my plate, I joined 2 anthologies, one is Dragons and Mages, and the novella I wrote for it is: Dragonsworn Guardian. It’s out in paperback, and will release in ebook in April 2020. The 2nd anthology is the Feisty Heroines set. We’ve got a great bunch of authors, and are pushing to reach USA Today bestseller. It takes a lot of work/sales on Amazon, iBooks & B&N, but will be a dream come true if we make it.

How can you support us? For only .99 cents, you can help us achieve our dream! Plus, once you pre-order, you’ll get a bundle of 26 books from the authors for FREE! Subscribe HERE! https://www.subscribepage.com/s7r6b2

My short story in the Feisty set is The Sunstryker’s Assassin. Blurb & Excerpt below!

I’ve always got numerous giveaways going on, and post about them in my FB group & Newsletter. Here are 3 for you today. 🙂 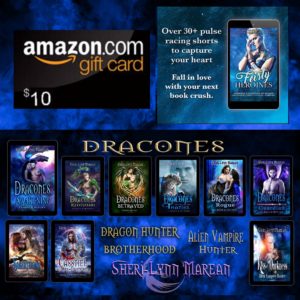 Blurb & Excerpt of The Sunstryker’s Assassin:

A genetically engineered dragon shifter …
… she was trained to follow orders and kill without question.

Only the strongest survive, so Treya climbed to the top and became one of the most elite assassins to ever come out of the compound on Icarus. With food in her belly, and a roof over her head, she’d been content—assured that the lives she ended deserved it.

When she began to have doubts about her missions, she was given a brother. The director thought that would keep her in line, and on task. They couldn’t have been more wrong.

For the first time in her life, Treya has someone to care about other than herself. A reason to do more than just survive. And she’ll die, and take out everyone around her, before she lets anyone harm her little brother. He is her sole reason for living, or so she thinks.

Get it now in the Feisty Heroines set, and discover a twist of the heart that threatens all Treya holds dear.

Treya watched, heart in her throat as the black and gold dragon—Ash, for it had to be him, turned his large head. He seemed to stare right at her.
Treya shivered. There was no way he could see her, could he?
He roared, a sound that shook the realm, then shot off the cliff, tail flicking sharply with a crack behind him. He arrowed his body straight down, going way too fast.
Treya held her breath, certain he was going to crash into the rocks. She exhaled as he leveled off at the last minute, and was shocked to realize she was shaking, that her knees had gone weak. She continued to watch, heart in her throat, as the dragon rocketed straight up into the sky. He entered a bolt of lightning, and swiftly followed it ever higher.
His whole body was illuminated energy, a brilliant glow that stung her eyes and made them water.
He roared again, a tremendous vibration that again rocked the world.
Treya stood rooted to the spot, mesmerized, as the legend called Ash became one with the storm.
Never in all her years, had Treya ever seen anything like the mighty creature. He owned the sky, the storm, the lighting, and as he gathered speed, it traveled with him. Bolts of light—energy—stayed with him, while others following in his wake, whipping and sizzling lashes of fury.
He drew the storm, pulled it, used it and shaped it, roars echoing the furious booms sweeping the land. The rain came down harder, faster, plastering Treya’s hair to her face.
Something stung her cheeks, and it was a moment before she realized it was tears. Treya couldn’t remember ever crying in her life. She blinked, unsure why she was reacting this way. Yet her heart continued to pound in her chest as emotion choked her.
As the dragon finally disappeared from sight, her heart calmed.