Hello Magical Reader. There is so much going on, even in the time of Covid!

Wonderful reviews are coming in for Dance with Darkness; Enforcement for Preternatural Protection, and we are just over six weeks away from the Feisty Heroines release! Yes, June 16th! Have you ordered your .99 cent copy yet? The Authors are making a run to hit the USA Today Bestseller list, and would really appreciate your help to reach our goal!

Plus, we’re donating the proceeds to 2 charities, the International Red Cross, and the Association of Critical Care Nurses in order to do our bit to try and help.

What have you been doing to keep sane? I’ve been trying to focus on writing, but it’s definitely NOT been easy… Still, I do have an excerpt for you today from Soroyan’s son Lucian and the Raizarch twins story. I like how it’s coming together, and thought I’d share a bit with you, so scroll down to read it.

Here’s a list of what I’ve been working on:

1- Lucian & the Raizarch twins ~ Untitled as of yet.

2- Claiming Beast. This is 2 new characters: Areliah and Roack. It’s a novella. Roack is Soroyan’s uncle-Loki’s other son, and this story is set in another world.

3- Dracones Journey. (Unless I come up with a different title) this is about Soroyan and Raven as they go to get the kids she left on Norvafellan. In this, Soroyan will meet up with Roack who he’s never met!!! 😜

4- Dracones Goldenthorn. This is Goldy’s story, and how she wakes up in another realm.

5- Unleashed Seduction. This is about Kateri, one of the Genesis Dracones, and sister to Taraven.

6- Demon apocalypse: Fallen Battle Angel. This is a short story about a fallen hybrid angel and a wolf shifter, not relate to any of my other works/worlds …at least not yet. That could change…

7- An untitled reverse harem novella with a dragon, a wolf, a vamp and tiger, along with a magic born female, lol.

The raizarch king’s youngest daughter would be the one to break the curse on the pack. But what happens when there were two daughters—twins?
Fiya, short for Defiant, raced in her black and silver wolf form to where her best friend was waiting for her so they could run together. If felt amazing to be able to shift into her human body whenever she wanted, and to keep that form was the best. It definitely beat waiting for the six hours a narcissist who basically owned them.
At a mere twenty-nine years young, Fiya didn’t know how the much older members of her pack stood it without going crazy. Though to be fair, a number of them hadn’t.
Fiya tried not to dwell on that, but rather on the freedom that hinged on her and her sister Willsa. This could not be her destiny, she couldn’t have been raised just to be turned into a brood mare for some male!
But it was her fate, and as the net felt like it was closing in more each day, her sense of self-preservation rose.
Fiya increased her pace, paws flying over the ground, the earthy scent of the forest permeating the very air she breathed. Though she gloried in being able to take on her human form at will, Fiya still felt the urge to shift and run as a wolf at least once a day.
“Where are you?” Arel, her best friend asked through their mind link.
“On my way, be there in just a moment,” she responded.
“You told me to meet you half an hour ago,” he said testily, though she knew it wasn’t over the wait but rather her situation.
“Sorry, I was just talking with Honor.” Well, arguing was more like it. Gah, her older brother could be so annoying, and to think for years she’d dreamed of having a sibling.
Funny how dreams can bite you on the ass when they come true.
Now she had many siblings, and Honor wasn’t the only one who chaffed her the wrong way.
So far, Fiya had kept her distance from most of her family, but there seemed to be no avoiding Honor or Willsa.
At the thought of her sickeningly sweet—kind, and wholly naive twin, Fiya let out a snarl. How could they be so different?
Well apparently being raised by two different families, one strict and demanding, and the other loving and caring really did make a difference in how one turned out.
What would they have been like if they hadn’t been secreted away with strangers at birth?
Their birth mother had tried to talk to them—to get to know them, but so far Fiya had resisted all her attempts. Though Fiya knew she wouldn’t be able to put her off forever. The female was tenacious, and Fiya supposed she had to be, to have birthed and raised so many young.
Fiya didn’t want to understand what it was like for her real family, because then she’d have to forgive them, and right now she needed her anger and sense of righteousness. It was all that would get her through this forced mating.
At least Arel was on her side of things.
He wanted her to let Willsa mate with the Okami male. Fiya wanted that too, but the thought of pawning that responsibility off on her twin didn’t sit well with her conscience.
Though neither did having one’s destiny forced upon her. And she was back to the vicious circle of what to do once again.
With a burst of speed, Fiya rounded the bend in the trail, then let out a sharp yip. She pulled up before she hit the rock wall smack dab in the path.
Her anger surged even stronger at the sight, and delectable masculine scent, of the large, dark-haired male with stunning greenish-blue eyes who’d dared to disturb her run.
Fiya shifted into her two legged form and glared at him. At six-feet-five inches, Lucian stood only a little taller than her. “Nice place to be standing. You know, you could hurt someone there.”
Lucian raised an eyebrow. “I wasn’t the one racing like an out of control freight train. You do know the trail skirts a steep drop off just around this bend, right?”
“Of course I do.” Fiya’s blood boiled at the touch of humor she detected in his eyes. “I was in complete control.”
He raised his eyebrows but didn’t respond to what they both knew was a lie.

Here’s a pic I drew of Lucian 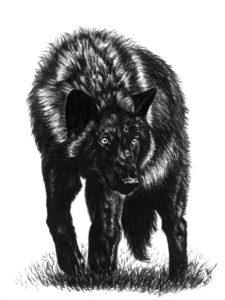